Update & will there be 5k head to head?

I didn't take the laptop down last night to the athletics so wasn't able to post an update but below is a breif update...

Yesterday evening there was good medal haul from the Guernsey Team and some exciting races... Kylie Robilliard & Lee Garland picked up a silvers in their respective events and Louise Perrio won Guernsey's first gold in a dramatic 10,000m race! There were also good performances from our junior athletes who would have undoubtedly picked up some good experience in their first island games. Checkout the the official clubs blog for full reports, video's and pic's of all of the days races.

In terms of my racing plans and for those of you that have been reading my recent posts will be aware that I wasn't planning to race the 5000m at the games, as originally mentioned this was due to having the National Champs/World Trials the weekend after. Last week I had a discussion with my coach and we decided that it would be better to get some training under my belt in the build up to the trials in Birmingham. However the temptation to race Janne Holmen has proved too much and the plan is now to race the 5k. Holmen is a Finnish International and former European Champion over the marathon so needless to say a worthy opponent. There are still conflicting reports as to whether he will actually race the 5000m tomorrow evening as he might decide to stay fresh for the half marathon friday but I guess we will find out tomorrow morning. The race is at 8.10pm.

Anyhow I'm going to get back to watching the relay heats.


utine involves a pre breakfast run out along the Mariehamn coast line
Posted by Lee Merrien at 09:39 No comments:

Unfortunately internet access in the hotel isn't currently working but hopefully will be by tomorrow, luckily there is wifi access at the athletics stadium, so currently sat in the stand with the team with the first event about to start!

We all arrived ok Friday evening at our hotel via our direct flight to MarieHamn (where we are located and also where the stadium is located). We've only been here a day but I think every is impressed with the place, the weather has been fantastic and Games Street which is located 5minutes from out Hotel -The Pommern has plenty going on.


The opening ceremony was held in the athletics stadium these things can be a bit on the long side but this year was ok and there was some interesting entertainment too! From a Queen tribute band to a musically comedian who wasn't scared to swear despite it being a family attended ceremony! below are are a few pictures off it all to check out.... 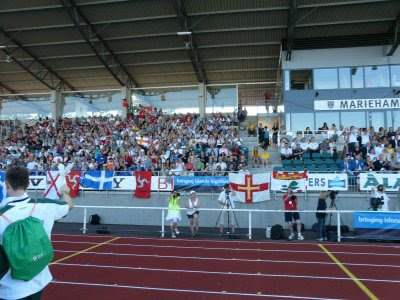 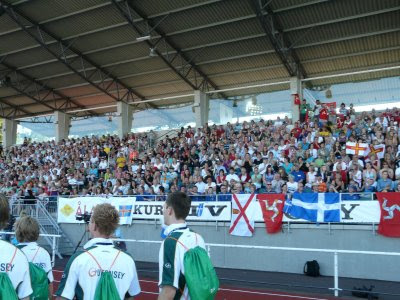 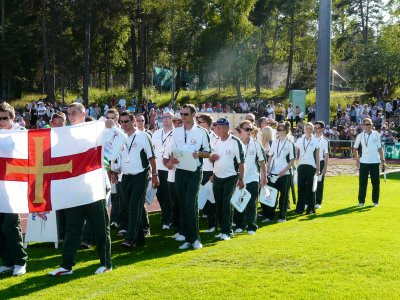 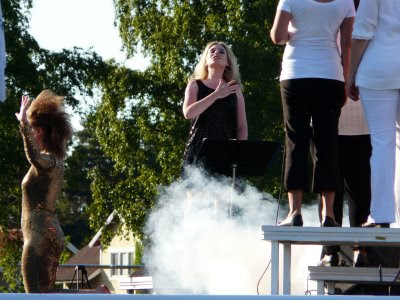 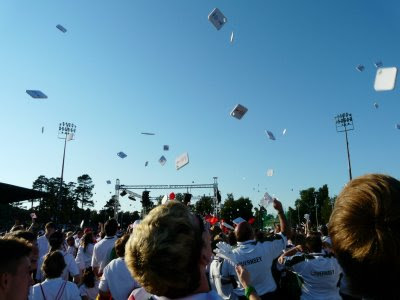 Above: we were given cushions to sit on during the ceremony but at the end they turned into throwing implements!!

For more pictures and gossip on what the Guernsey Athletics team are up to generally checkout the Guernsey athletics blog (http://gsyathleticsaland2009.blogspot.com/. As there is internet access at stadium we plan to video the races live and get them online quickly via a utube link on the blog so you'll be able to watch most peoples races not long after they happen.

In terms of my training this is the end of another 80mile week, feeling ok generally after the travel and a just a couple of easy runs yesterday. Got on the track this afternoon before the racing started and felt ok, hot today though! temperatures in the high 20's and felt particularly hot training as due to competition program starting at 6pm I had to go out mid afternoon.

Will post more tomorrow, hopefully get access at the hotel but if not I will make use of the free wifi at the stadium again.


Catch you all tomo.

Just a quick post before I head off to Aland for the Island Games week. I'm all packed and ready to go, packing proved a challenge mind as we are only allowed to take 15kg of hold luggage and 5k of hand luggage, so to had to pack quite light in some areas.

My race isn't until a week today (1500m) so i will have the best part of a week to maintain my training in preparation for the National Champs whcih is the week after I get back from Aland. It will also be my first 1500 of the season being that 5k has been the focus this season but it will be nice to have race over what was previously my main event.

Since the Watford race training has gone ok, I had an easier week after the race with the aim of letting the body recover a bit more, so it was predominately steady running but I still clocked up 80miles during the week. My track session Tuesday was ok whilst nothing spectacular but funnily enough since then the body and particularly the legs have started to feel pretty good. I'm still on course to clock around 80miles of training this week but again this has been mostly steady stuff with a couple session, but these have been fairly controlled.

I must admit I've really enjoying my running the last few days particular with the good weather so hopefully Aland can provide much of the same. In terms of the Guernsey team there is a fairly young team heading out this year with many new faces, which is great to see. Over the past few years and particular when I was involved with the athletics development role I saw many good young athletes in the sport and now many of those are heading to Aland which will hopefully act as a spring board for bigger and better things for those individuals. There is certainly still no shortage of experienced athletes going along despite a few absentees and I'm sure we the team will still bring back plenty of medals.

Well i finished in 8th place in a time of 14.11, so not really what I was looking for, unfortunately things don't seem to have moved on as they should have from the Manchester race 2 weeks ago. Legs still feeling a little lack luster and its more frustrating than anything else after the successes of the winter months that both training and racing isn't quite going as expected at the moment. I don't have a race now for a few weeks so the plan is to kick back slightly over the next week and not too push training too much during this period and allow the body to freshen up a little. Despite the time i finished with on Saturday and how the race felt in general I still at least managed to find some strength and speed over the closing stages, and the one thing which I do take a lot of confidence from is that whilst training and racing are clearly not quite on song at the moment I'm still not a million miles away. Only a 1-2% improvement for example would see me nearer to what I expect from myself and the sort of performances I feel I'm capable of on better day.

On a lighter note it's great to see the local paper are quoting me on my races using my twitter, presumably this modern day reporting :-) Perhaps I should try and seem what crazy quotes I can get printed up :-)

Next race is likely to be the Island Games 1500m, which is at the end of the games week. With the National Champs the week after I get back from ALand its unlikely that I will compete in another event as I need to get some key training completed while out there.

Assuming internet access is easily available while at the games i will try to keep people updated with details of what is going on in team and in general within the team accomodation.

All for now, Cheers

Lee
Posted by Lee Merrien at 14:31 No comments:

Very quick note as I'm currently sorting out last few bits before I head to the airport. Racing in the BMC GP meet tomorrow evening at Watford, in my second 5k of the season. Have eased back the training this week so hopefully legs will be nice and fresh for the race tomorrow. Watford has been a good track for me in the past with a number of my PBs over the shorter distances having been run on this track, have never a 5k here though so all being well I can add to the list.

Hopefully I won't be stuck in the aiport all day Sunday (unlike last time) and will be able to post a race report on sunday evening.

Lee
Posted by Lee Merrien at 12:06 No comments:

On Saturday evening I was racing in the BMC Grand Prix in Manchester. I finished 6th in the race in a time of 14.08. Check out the link to the results ....

In terms of my finishing time I'm a little disappointed but that's partly down to my high expectation this season, I believe my 5k personal best is a little weak and after the winter I've had I feel that I'm capable of running faster times, when everything falls into place. All things considered though it's a reasonable start to the season, as my legs are far from feeling recovered from general training at the moment and conditions also weren't ideal for fast times.

I set off fairly conservatively and ended up working my way from the field as the race went on and was able to finish quite strongly over the last lap or so. I think with a slightly stronger field i.e. more people running in the region 13.45-14.00 minutes, and without the wind we encountered on the back straight each time I could probably have run my PB close (currently 13.57). I feel at the moment I'm still waiting for the past few weeks of training to come out the system (hence the heavy legs at the moment) and once that starts to happen I will be ready to run faster times.

With 6 weeks to the National Champs I still have plenty of time for performances to start falling into place and essentially start peaking at the right time. Before then I also have Another BMC meeting at Watford and the Island Games in Aland.

Right time to get a run in.

Lee
Posted by Lee Merrien at 16:53 No comments: