OK there's Wet and there's this!

Last time I blogged I was nearer the end of my trip in Kenya and about to travel home, this I did but not without a bit of drama to make this interesting...

Usually we leave Lorna's Centre about 2 hours before our flight as the drive is only 45minutes to the airport, the airport is even smaller than Guernsey airport so you are usually safe arriving 45-60minutes before. On the day of travel though, Willy (Songok) who looks after us while we are there, came and said we would be leaving earlier due to flooding on the road between the centre and the airport (there is only one tarmac road the rest of dirt roads) in order to allow for any possible delays. We had been told that we should be able to get through the flooded area, which was also being blocked off my some of the Kenyan Matatu (Kenyan mini bus/taxi) drivers. This way apparently a way for them to make a quick buck as they were charging people to carry them (and their belongs) across the flooded section of road, where they were able to pick up another Matatu! When we arrived at the flood it was carnage... 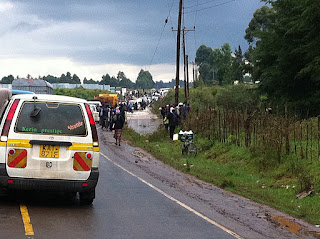 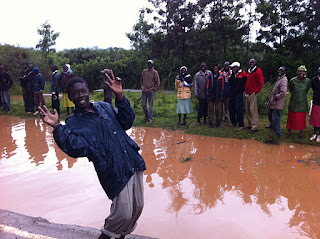 Whilst it was all pretty amusing initially the novelty soon wore off, particularly when a number of the locals saw we were in a 4x4 vehicle and starting climbing onto the roof. I can only presume they thought they would be able to get across the flooded road without getting wet but I must admit for a minute it didn't feel particularly safe! 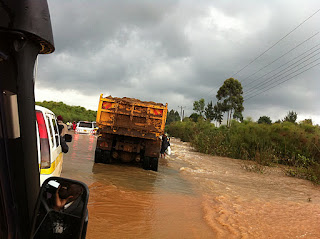 After trying initially to get across the road things proved unsuccessful and so our driver decided we would take the detour via the various dirt roads in order to bypass the flood and then rejoin the main road further on. Literally no sooner did we back up and turn off onto an already muddy and flooded dirt road it started lashing it down with rain! The dirt road were proving a challenge even for our 4x4 and there were a few times I thought we were going to slide into a few Kenyans walking between villages.


We had only driven a mile or so before we came across our first major obstacle, which was a broken down car blocking the road we were on. Our driver decided to try and get into the adjacent field in order to drive. Unfortunately we became stuck and despite our drivers best efforts it didn't appear we would be getting out anytime soon as the wheels had dug themselves a nice deep grove into the mud. A Kenyan guy in our vehicle managed to find some rocks which were thrown in by the front wheels in an attempt to find traction but it didn't seem to help. Fortunately by this point a local man had joined us and he basically dug us a pathway for our driver to able to negioate his way out, although not before we had all got thoroughly socked in attempt to help push our vehicle out.


Despite being on edge for much of the next 2hours we did at least make it through to the main road eventually, through some pretty hurrendously muddy and flooded sections. The usual 45min journey from the centre to Eldoret Airport took us 3hours and we arrived only 20mins or so before our flight but we made it at least!


On a lighter note, early in the day myself, Hannah England and Luke Gunn had met up with Tom Payn, a british marathon runner who bases himself Iten. Tom whilst renting a room elsewhere spends much of his time with a training camp called Run-Fast and he invited us into visit the camp. We met Edwin Kipyego who is one of probably the camps star athlete and one to watch out for, his 10k PB is already 28.12 and 61.23 for the half marathon and so I've been told has only been training serious for a couple of years.


We were invited into his accommodation for a cup of chi (kenyan tea) or at least Edwin's version of it, as he had added a sachet of hot chocolate to the original flask, however having not had anything particular sweet for the past few weeks it was a bit of treat to satisfy my sweet tooth! 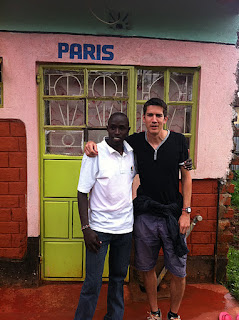 (myself and Edwin outside his one room accommodation which sleeps two people, a room no bigger and 10 feet by 10, includes 2 bunk beds, a sofa, a tv and a sink, its compared to most Kenyan homes this is luxury)

The camp was situated slightly off the main dirt roads, near to Iten town centre and meant we had to walk through a few back streets (which were basically muddy paths) to get there and we passed lots of Kenyan kids en route. They apparantly have all of December off school. Myself Hannah (England) and Luke (Gunn) couldn't resist a picture with them. 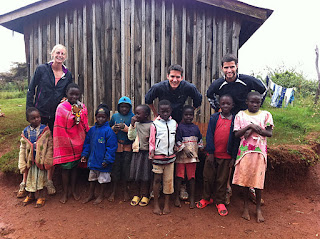