It was a pretty brutal race on Monday, where i finished 14th in 30.18. Again much like the 5k the race was not one in which I was likely to run a fast time, the temparature was 29c at the start of the race and again fairly humid. It would have been easy to just say I didn't have a good race but actually on assessment there was were a number of positive points to take from my performance. For one it would have been the easy option for me to drop out, I was finding it tough going early one, from as early as 3k into the race, when udner normal circumstances I should felt in control until around half way. I remember the america accent from the loud speaker (the stadium commentator) announced 17 laps to go! it was hurting at this point and initially I thought 'crap' this isn't going to be pretty but then I just thought to myself I'm going to finish this race if it kills me. I remember dropping out of my one and only race many years ago in a local race in Guernsey, much like Monday night it was hurting from early on but I took the easy option and dropped out... ever since then I said to myself I would never drop out of a race again. Also on reflection whilst I didnt feel great and wasn't running espicially well nor were many other athletes (with perhaps exception of the first 4 or 5 athletes) with a number of the field running between 60-90seconds outside there best times. All in all it was certainly a learning experience and one I won't forget.

Now the plan is to take a rest for my remaining days in Delhi, I will also take some down time when i get home and enjoy some time with Thomas and Teresa, who I haven't see now for nearly 4 weeks. Going forward I will easy back in training and have yet to make any firm plans for racing between now and the end of the year. Next year will be another important year with a spring marathon on the cards with aim being to run the Olympic qualification time (as yet unknown), so I need to make sure the body rest up and recharges now so I can make this happen.

I've been in Delhi now 5 days and no Delhi belly... so all good thus far with regular hand washing being the order of the day. The games village has been very good and well organised and the standard of the accomodation has also been much better than the media reports were making out, although I did of course arrive a week later than most of the team. The stadium for the athletics is an old structure but still an impressive building with a capacity of 60,000 people, unfortunately it nevers manages to fill up but still creates a good atmosphere, espicially when Indian athletes are involved. 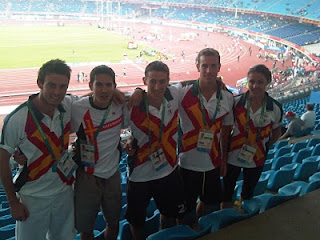 Those who have been following the games results will have realised that I have raced already in the 5000m on Wednesday evening, finishing 15th in a field of 23 and in a time of 14.19. Not a particularly fast time but the race and the conditions were not conducive for fast times unfortunately. The race started fairly slowly with a 71second first lap, swiftly followed by a 61sec lap at the front and then slowed again. Whilst the pace settled a litte after this it still made things difficult for me to run even pace with such a big field. I must also must admit that I found the conditions more challenging that I expected. The weather reports that are printed at the bottom of every athletics result sheet didnt really tell the full story either... they claimed it was 32c and 60% humidity however this was printed on the bottom of every result on the day I raced suggesting that one reading had been taken earlier in the day and used for all results. I actually think that the temparature was cooler but the humidity was much higher than this. When I raced in Barcelona earlier in the summer the humidity was 70% and this felt much more uncomfortable than Barcelona. In terms of the race I was in contact with the lead group until just after halfway however when the pace moved on during the 4th km I had a bad patch and was quite aware of the humidity during this stage. I managed to find something over the closely stages and was involved in battle with two indian athletes and a guy from Guyana, I thought I'd done enough coming down the home straight to hold them all off but with 50m to go one of the indian athletes sneeked through on the inside.

My 10k is now 2 days away and its good to have the chance to get back on the track (in previous games I've only competed in one event) and I'm sure the extra time should will enable me to adapt to the climate a little more. The race will be on at 3pm UK time I believe.
Posted by Lee Merrien at 11:11 1 comment:

This will have to be a quick post as I only have 40mins before we drive down to the lake for our last run in Font Romeu (although technically the lake is not in Font Romeu). As soon as we get back from the run it will pretty much be shower, change and then head off to Barcelona for the night. Our flight departs early tomorrow morning so we are staying in Barcelona so to get at least some sleep before we begin our travel to Delhi. I hear everything is pretty good in Delhi in terms of accomodation now, its just the odd stray 10 foot python you need to watch out for :)

In terms of the training camp the two weeks at altitude does seem to have gone very quickly, granted two weeks is only half the time I spent up here in July but it has flown by none-the-less. Its been a productive training trip too, which as I think as I mentioned in my last post... is now like a second home, although its been very quite around here as it's now between seasons. Even down the lake, where we have tended to do much of our running there have been fewer people about, although ironically on Friday when we went down for an easy run to shake out the previous days track workout, we see next to no one down but of the 2 of the people we do see down they are from Guernsey! It was infact a chap called Mike Rhodes and his wife Jenny, Mike used to be my manager at Barclays Bank back in day when I had real job... as wife tells me :). As it turns out Mike has been living out here for 6 years running a guest house in a small town called Les Angles, which is basically a small ski town adjacent to Lac de Matemale (where we do a lot of our running). We stopped for a quick catch up before continuing our run, but next time I'm back in Font Romeu I will be sure to look him up. My wife also used to work with Mike so perhaps I will bring the family out here next time.

I better finish up now but next time I post will likely be after the 5000m in Delhi, the race will be on at 3.25pm UK time (which is 7.55pm, Delhi time) on Wednesday 6th October. The 10k is 5 days later but I must admit I don't even know the start time as I'm not thinking that far ahead. You never know what the conditions will be like and how the race will unfold but from my training I am in shape to to run a personal best, which would for me would rap up a good season. Plus chances are i unlikely to get another chance to run a 5k in the future as my long term focus will switich back to the marathon.

Ok better dash now as leaving for that run soon, thanks for reading.

Lee
Posted by Lee Merrien at 07:45 No comments: