Update from a wet Kenya

I’ve been Kenya a couple of weeks now, in fact my trip is nearly at an end! but my altitude camp has gone really well for me. A couple of weeks before I got hear I had to pull out of the Great South Run due to illness but I now feel I have found my feet again and I’ve put in some good 100mile weeks, alongside all the little things too. The added benefit of being on a training camp is having the time to utilize recovery with daytime naps the order of the day… I do manage to squeeze a few in at home but logistically it’s always more challenging, out here its part of the daily routine.

This now my third time in Kenya, I also came out in January and March earlier this year before the Virgin London Marathon, so I feel quite at home. Things have been a little different this time around though as there’s been a substantial amount of rain, somewhat unusual for Kenya in November. There main rainy season is usually April & May and whilst there is supposedly a short rainy period in November, this has been anything but short. Previously we there has been rain it’s mostly been over night and not that regularly but since we’ve arrived there has been rain most days and some heavy down pours during the day too. I don’t feel it has affected my training all that much in terms of quality but we have had to adapt the surface, the trails are all ground/clay based so as soon as you get any persistent rain they become very stick and sometimes just not run-able. The only option for running when its been really muddy has been the solitary tarmac road which goes through Iten, so this has lead to a few out and back on the bad days. Whilst the rain has not been a big issue for us, with perhaps the exception of the crazy drivers when we have taken to the road, no pavement here! For the people locals it is a little more serious, as the heavy rain is delaying the harvesting of crops and this for many is there only source of food or income.

It has not been all bad weather though, as we did manage to get on the Iten Track a couple of times. This is always an impressive spectacle on ‘session day’, that being a Tuesday morning, as you will always find large number and various Kenyan training groups in full swing (assuming its dry day). We were even witness to something other than distance running on one occasion with some crazy high jump techniques going on. 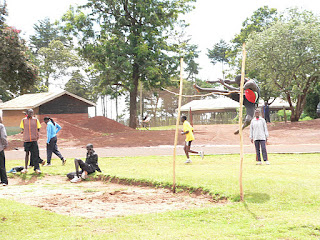 My sessions have gone surprisingly whilst here actually, as after picking up a stomach bug at home a few weeks ago I must admit to did struggle with my training somewhat in the aftermath. It been nice to train in group again though and having been on previous UKA/London Marathon training camps I know that these trips work well for me and it has been just what I needed to get my fitness back and set the wheels in motion for the next few months of training. 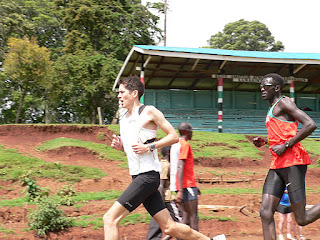 Its certainly tough training here though as you won’t find too many flat runs but I’m sure that is one part of what makes so many successful athletes here. I did have an unscheduled day off the other day however, feeling dizzy and generally under the weather, fortunately it turned out to be just a 24hour thing… or as I've since heard it call here ‘a little malaria’. Whenever a Kenyan person gets sick, whatever shape or form it takes it is usually referred to as malaria, it seems this is just a word for someone who is ill! Whilst of course genuine malaria is a serious issue here and across many areas of Africa it seems to me that the Kenyan’s version of man-flu is this ‘small malaria’, don’t let the reference foul you. When I was here in January one of the Kenya guys who works at the centre was off ill with malaria, only to be back at work the next day!

Just a few more days here now and then off to Preston to catch up with a Sports Psychologist and then on to Loughborough for some physiological testing to measure how well the camp has really gone.
Posted by Lee Merrien at 12:40 No comments:

It’s between a while since my last blog even by standards but plenty to update you on, despite my lack of racing…

I took my usual break after the World Champs as planned, actually that’s a little bit of lie as I actually started running a few days earlier than planned. I usually get out on my push bike just to do something in the second week to fend of the boredom but unfortunately my bike was out of action so went out for a few easy runs instead. Nothing major just 20 to 30mins of easy jogging on a daily basis but it at least kept the cabin fever at bay.

I have since been building things up again training wise and despite not feeling particular fit I ran the National Road Relays for my UK club Newham & Essex Beagles only a few weeks after starting back. I have only competed for Newham a small number of times over the last 2 years, mainly due to events clashing with other racing plans but I enjoying doing something as part of a team when the chance arises. On previous outings for Newham in UK competitions I have always been on a winning team, but with a slightly weaker team (partly down to me not being in shape) and coming up again a strong Aldershot team we had to settle for 3rd spot on this occasion. I ran 4th leg for the team and whilst my time was somewhat short of what I would expect to run I came away thinking I can now kick on the training. Unfortunately no sooner did I touch down back in Guernsey airport that night after the relays did I come down with a stomach bug, this let to no running for following week and when I did start back again things took a good few days before I started to feel a bit more like myself again. For those reasons I decided against running the Great South Run which I was down to do originally and decide I would be better just getting myself back to full health.

Since the Daegu Champs I have a lot of time to analysis my past season and also look ahead to the next 12months and most importantly how I will tackle it. One of the main things I have done is sit down and think about how I can improve things and find those little difference, the one percenters which will all add up to an overall better performance. I have always set myself targets and within that the little processes which will get me there. A book which first encouraged me to start thinking like this was ‘Gold Minds’ by Brian Miller, a book which my old coach recommended to me. The book is a few years old now but the principles are still useful, although recently it’s been useful to fine tune things following a meeting I had with a guy called Tim Newenham. Tim runs a company called Javelin Consultancy and the Guernsey Sports Commission have been using him to help develop a support programme for athletes in Guernsey. Tim helped me fine tune my goal settings a little more which helped identify a slightly clearer path to achieving success. I still have one or two things I need to finish off in terms of my full season plan, namely the marathon I will run in the spring, but I plan to decide this over the next couple of weeks.

I am now a couple of weeks on from the road relays and I’m actually out in Kenya at the minute on a UK Athletics & London Marathon funded altitude training camp. I will be here for just over 3 weeks with the plan to use the altitude and extra time away from my usual environment to focus on things like rest and recovery a bit more. I have to admit I have found the past 8 weeks challenging at home with our little girl Jessica (who is only 13 weeks old) still not sleeping through the night yet. I do find it hard to be away from the family these days but the training camps and the altitude exposure in particular are something I see as a an essential ingredient if I’m going achieve my targets. Our boy Thomas is a really good sleeper at night fortunately so all being well Jessica will follow suit, I joked with my wife that it she could get her sleeping through the night for when I return that would be sit nicely with me :) I won’t repeat what she said to me!

I leave you with something which made me laugh following a conversation with my son on the phone the other night (sorry I have become one of those parents who talk about their children all the time). He has been given the part of father Christmas in his nursery nativity play and he has to sing the song quoted below, however he when he sang it back to me he replaced the final word (the word out) with the word ‘off’, hopefully he gets it right on the day!

Father Christmas got stuck in the chimney,
So he began to shout,
If you boys & girls want your toys,
You better pull me out.

You can see our concerns at his mistake!

I will try to post up regular while out in Kenya, with what Kenya & the camp in general has been like but in the meantime if anyone has any questions please feel free to leave comment or questions in the comment box below.
Posted by Lee Merrien at 09:30 No comments: