Weekend of local athletics & looking ahead...

Saturday afternoon saw most of the Guernsey Island Games squad competing in the Meespierson Golden Series match, which had numerous athletes from the UK including squads from Wales and the RAF competing. Unfortunatley yours truely wasn't running but it was good to see pretty much all our local athletes running on home soil for the first time in while. There were plenty of competitive events and we even had the good weather to go with it!

Teresa was away on saturday afternoon and evening so I was on Thomas duties. I took him along to watch - not his first time to the track... trying to get him familiar with the environment :-) Not sure he knew what was going on but seemed happy enough. The athletics club also kindly presented myself, Martine Scholes and Rob Batiste with a gift each for our work for the athletics club, all three of us have recently stepped down from our posts, myself as development officer, Martine as the clubs hub for all things admin and whatever else people were able to palm her way and Rob was the Clubs president. It was comletely unexpected and nice to get some recognition but couldn't help feeling a bit of a fraud seeing as the club has a wealth of hardworking volunteers. Hopefully the work I did has helped athletics move forward over the past 3 years though. Certainly Rob deserved his after filling the role of club president for many years and is largely responsible in helping bring on local athletics so much in the past 5 years.

Looking ahead I have my first track race this weekend. Another trip to Manchester , this time I will be racing at Sport City - the athletics stadium adjecent to Manchester City football ground. This was also the warm up track for the 2002 Commonwealth Games and has been used a number of times in recent years for the National Champs so I guess its a bit of home from home as far as UK venues go. The meeting is a BMC (BRitish Milers Club) Grand Prix meeting and I'm racing over 5000m. Being the first BMC of the season usually means a good turn out so Im looking forward to getting in a good race and all being well running a PB first time out.

Anyway that's all for now, track session this evening which will be my last intense workout before the weekend, after that it's about recovery and getting ready to race.

Lee
Posted by Lee Merrien at 14:14 No comments:

Well it wasn't quite the race I was hoping for, I finished 14th overall and 6th British finisher but it was more the time and the run in general that I was a little disappointed with. I ran 29.47 which is approx 20secs slower than last year, conditions were far from ideal admitedly with a strong head wind for large sections of the race. Many of the athletes thought the wind could account for 20 to 30secs which mean the run was on par with last year, however I had set my sight on running a lot faster this year. Teresa ran and she ran a pb of 51.10 so at least one of the Merrien family was happy. She has her sights set on further races now - it's catching this running bug!

On the plus side I have a race under my belt now which has blow the dust off things and my race fitness and sharpness will only get better from now and into the track season. My body has struggled a little bit to recovery from heavy training over the past month and sometimes it just takes a little longer to recover than you plan for.

Overall I still enjoyed the event and being in and around the city with such well participated event (33,000 runners) is always fun. I think it's the first time I've raced Gebrselassie too (if you can call it that!). We happend to be in the hotel life together on Saturday evening coming back from dinner but i decided against asking for a photo together! I regret it now!

The organisors also had a rather novel sprint event arranged in main Street (Deans Gate) in the middle of the City - they closed the road and set up a 150m stretch of temporary track which saw the fastest man in the world Usain Bolt run a new world record for the distance. Unfortantely the race was on at 6.30pm and I had to be at the airport for my flight home so we didn't get to see the race.

Right I better go as I need to get started on some D.I.Y. I have some blinds to put up in Thomas' bedroom which I've been putting off for a few weeks. Myself and D.I.Y. don't usually get on well with one another, whilst I'm not too bad at it, it does elevate my stress levels. Teresa is still away until tonight so at least we can't fall out over it! which is pretty much guaranteed if we are in the same room whilst I attempt to construct something. Finger crossed I have a stress free afternoon.
Posted by Lee Merrien at 13:52 No comments:

This weekend I'm off to Manchester for the Bupa Great Manchester 10k. This will be the 3rd year running that I have competed in the event, which has usually acted as a good first race of the season for me in the past. It's also usually very popular with elite athletes home and abroad and this years entries suggests no different with a strong start list posted. This year entries include the living legend that is Haile Gebrselassie. Check out the link below on the runnerslife site which has a comprehensive list runners along with notable performances for each...


Since the training camp in Portugal I have been carrying a bit cold, partly down I believe in getting used to juggling training with family and work again off the back of some heavy training. Plus Thomas seems to have had his fair share of illness recently, so ended up picking up his sniffles on returning home. The immune system seems on the mend now and probably stronger than ever after the past 2 months! With an easier week of training the past week or so body and mind are starting to freshen up in time for Sundays race. The immune system has certainly felt healthy enough to cope with the introduction of altitude this week, as I've started using my altitude tent again which I plan to use regularly now over the next month or so. This basically involves sleeping a sealed tent at night which simulates being at higher altitude. I'm used to it now (as I have used it on and off the past couple of seasons) but it's bit noisy at first as you have a generator the size of small fridge inside the tent with you!

Check out a rather sleeping looking me inside the alternative to the mile high club... 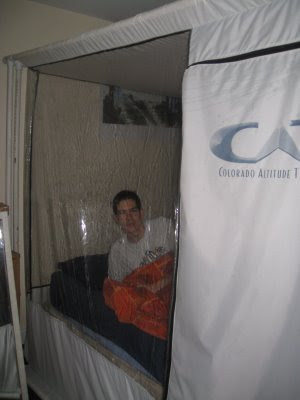 Race is 10am Sunday morning but look out for the results on Sunday evening or check out BBC 1 on Sunday afternoon for courage of the race.