Well I've been at altitude now for just over a week and things have gone well since my arrival in Font Romeu. It feels more of a home from home now, although I am missing the family but this is something I will have to get used to as I'm planning to get to altitude much more regularly as part of my future plans. I certainly feel like the combination of having been on the previous UK Athletics altitude camp and having used my altitude tent for two weeks prior to coming this time has made the transition to real altitude somewhat smoother. I only arrived last Monday but by Wednesday I was getting my teeth into a session outside of the usual easy running (which tends to be on the menu for at least 4 or 5 days before a harder session is attempted). My first session was somewhat controlled however, which was... following a good warm up 4miles of tempo running plus 6 x 1min efforts plus another 3mile tempo. Tempo running needs to be adjusted slightly at altitude due to less oxgyen being available and I use a combination of adjusted target speeds as well as keeping one eye on heart rate values (i.e. compared to my normal sea level readings) alongside and like most of my tempo's runs a certain amount of run to 'feel'. I was running at very similar paces to those I was operating at the previous altitude camp back in July (for my tempo runs and when I was more acclimatized) so this early indicator bodes well. Since that session I have also been on the track and posted another solid session, although I feel that this may have gone better if not for an unsettled stomach (which I was carrying over the weekend). A couple of the lads had some symptoms of a mild stomach bug around the same time and I felt under the weather over the weekend but I'm pleased to say everyone is now recovered. Ironically it seems with all the talk of the athletes potentially getting Delhi belly at the Commonwealths games I pick up some pre-Delhi belly! on plus sider perhaps this will give me a cast iron stomach.

This camp generally has a slightly different feel to the one back in July as many of the athletes are hear to start their winter training, whereas myself, Chris Thompson and John Beattie are preparing for Delhi but it's been an enjoyable one with a good mix of focus and downtime. Our appartment which includes myself, Chris Thompson and Steve Vernon have joined forces in the evenings with our fellow athletes and taking turns with the cooking of the evening meals, which made for good social evenings. We then tend to spend the reminder of the evenings recovering from training with a few DVDs and the odd quiz to pass the time, if you're ever bored and you like quiz's checkout http://www.sporcle.com/ . 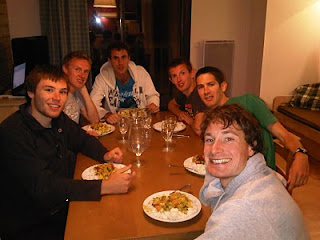 This trip is also somewhat shorter this time around for me (two weeks in all) and there is also little more than a week to my first race (the 5000m) and less than two weeks until the 10k (I'm doubling up) but I'm looking forward to getting on the track to race. It's been over 12months since I last raced 5000m, which was the National Champs In July last summer but I feel I'm in better shape now with the strength of marathon training under my belt and a bit of sharper work added to the mix recently. I feel I'm yet to put my full game face on but I have no doubt that when I arrive into the village that will change and the pre-race adrenaline will start flowing.

I will try post one more entry before I travel out to Delhi.

Until next time, that's all for now.
Posted by Lee Merrien at 15:27 No comments:


As per normal it's been a few weeks since I last posted but I head to Font Romeu this morning for two weeks altitude training tomorrow, before then heading to Delhi for the Commonwealth Games, so I should be able to stick some more regular posts up while there. It was certainly hard leaving home yesterday having not that long been away, I certainly appreciate my time at home with the family more these days.


Things have gone well this week with both training and racing and I feel I have turned a corner these past few days. Generally the first few weeks back after the marathon had been going ok but were yet to suggest that all cylinders were firing. The Great Yorkshire 10k in Sheffield was 2 weeks ago, I ran 30.13 for 9th place in course which finishes up a nasty climb over the last last 800m. A solid run considering I had only been back into full training 2 weeks but also difficult not to be disappointed from a competitive perspective. I was also involved in some of the promotion of race, alongside former Olympic Marathon Champion Stephano Baldini, who was running in his last race in the UK before retiring. It was quite noval for me to be involved with pre-race build up alongside athlete's of his pedigree and I would have liked to have been able to give a better account of myself but it at least showed me I wasn't a million miles away in terms of specific fitness.


More recently I ran in the Inter Trust Race night last Thursday in Guernsey what was my last race before heading off to complete my final preparations ahead of Delhi. I had arrange for GB junior Jonny Hay and his training partner Adam Clarke (who paced the race) to come over. Jonny has been running very well recently and I knew I would get a good race from him. Adam set a good pace early on with the aim of getting us to 2000m into the race at close to 8min pace, but at 1600m I was feel strong and went past Adam to ensure a strong pace was maintained. From here I stretched away from Adam & Jonny and maintaining fairly even lap splits and finishing in a time of 8.06, which I was more than happy with. Conditions were decent but there was a little bit of head wind which was noticeable the top bend of each lap so given that plus the fact I ran the second half of the race on my own, suggests I am close to PB shape (which is 8.00). So all in all a good position to be in going into Delhi.


It never fails to surprise me the lift you get from a solid race performance and since the race I have felt really good in training, I ran a session yesterday of 15min tempo, 16x100 back to backs off 15sec recovery, followed by another 15min tempo and it was arguably my best session since Barcelona. Paces averaged at 5.00 per miling for each of the 15min sectons which were also run progressively at approx 5.20,5.00,4.40 per mile pace for each 5min section, the 100metre back to backs were all in about 15 secs (so approx 4.00 min mile pace). I also ran the session on the coastals paths which are undulated so a strong session

Right better dash now as off to Gatwick to catch my flight to Barcelona.