I’ve been in Kenya for two weeks now and in terms of training I feel like things are slotting into place well. I have been carrying a few niggling injuries over the past few weeks but being hear has allowed me to manage them better, with regular treatment and additional rest between training. The running itself has been a bit more unusual compared with my first trip in January, in that we have had quite a bit of rain last week, fortunately it didn’t disrupted training, although I did find myself a little low on clean training kit at times. There were also a lot less Kenyan’s out training first thing in the morning too… they don’t like the cold or the rain, so they often wait for it to clear up for going out running.

I have been running most of my day to day steady runs with the other British runners who out hear which includes Andy Baddeley, Mike Skinner, Ben Whitby, Mark Draper & Tom Bedford who are all part of the same training group back home. Whilst they have different immediate terms goals to me we have started most easy or steady runs together which has been good.

In terms for my key training sessions these have been on my own mostly with my a good 30k tempo run on on Friday, using and out and back route along a road called Kaptuli, a short 20mins drive from the training centre. Whilst still being offroad it provided me with slightly flatter route than the options directly around the centre. I ran the run solo but did have Barnabus, a local Kenyan who works for Lorna & Pieter as a driver and general worker at the centre following me in car. He drove behind me in a 4x4 and pulled alongside me every 5k to provide drinks. He certainly needed the 4x4 too, as with the overnight rain we encountered a few tricky muddy patches along the route. It was a good session for me though and confirmed to me that my fitness is good and that I’ve managed to acclimatization to the altitude as much as I would have hoped for. It was arguably one of the hardest workouts I’ve done too with the high altitude and an undulated route a tough combination on what was my longest marathon tempo run to date. More recently I joined the other guys for a track workout yesterday. We drove to Eldoret Univeristy track on this occasion as we had heard it was a better surface than the Iten track. I thought Iten track was busy with some 80+ Kenyan distance runners on there last week, however this was something else with some 120+ using the Univeristy, there seemed bearing enough of a gap between training groups to slot in to do our session, however once we got going we seemed to fit nicely around the various moving trains around the track. There were a number of Kenya’s better know athletes training that morning with Eluid Kipchoge (5000m Pb 12.43) on track, unsurprisingly he was not even at the front of his training group (of some 30-40runners).

Outside of training I have been lucky enough to time my training trip with the 50th Anniversary of the St Patrick High School here in Iten. For those who read my blog entries back in January you may remember me writing about the School. It’s one of Kenya’s most famous, particular in terms of running, some 30plus Olympic runners having attended the school, there is a tree planted and marked for each athlete within the school grounds. 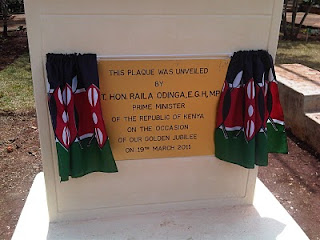 The anniversary took place on Saturday and was attended by thousands of locals as well as many famous past students and religious and politicial leaders, with the current Prime Minister Raila Odinga being one of those. We didn’t stay long enough to see any of the athletes who were reportedly also attending but I did pick myself up a programme which included the school athletics records…the school record for the 800m is 1.43.64 and the 1500m record is 3.33.24, so not to shabby for a secondary school. It’s worth noting though that some Kenya’s don’t attend secondary school at the same ages as we do. They will often take a couple of years out between primary and secondary school to work so they have the money to attend as the like of St Patrick’s, which is a boarding school. That said both athletes in question (Japheth Kimatui and William Chirchir) were both 18 when they ran those times. Whilst we did not stay for the full celebrations it was a privilege to attend and clearly a big deal for local people and those who run the school, so something to tell the grand kids about. Next week are hoping to go into one of the classes during lesson time which should be fun, apparently the kids love to see Mzunga’s!

Sorry about the lack of pictures in my blog posts, I wanted to include some additional pictures but the internet isn't great here and I couldnt manage to add them, so I will have to post them up on my return home.
Posted by Lee Merrien at 05:50 2 comments:

20k Race Result & back in Kenya

Last Sunday I raced on the road over 20k in Alphen, Holland, finishing 5th in 60mins 30secs. This was the only race I have planned in my London preparation so I was keen to race well, which I think I managed. Conditions were very windy unfortunately which is apparently quite common for this event, making things a little tougher. I was aiming to run sub 60mins which would equate to around 63mins for the half marathon but the wind put paid to that, with a 4km section in particular directly into a strong headwind. I also ran the last 12km solo but found that I was able to get into a good rhythm and hold my pace well (when not into the wind). A good result and bodes well going into the last 6 weeks of preparation for London. You can find offical race results here www.prorun.nl/live/ my race is the 20k wedstrijdloop which you need to click on (far right on the tool bar).

Following the race I was back on my travels that evening flying back to London Gatwick before then jumping on a bus to Heathrow. I stayed overnight in Heathrow before then getting my flight to Nairobi, not before squeezing in an early morning jog around Heathrow I might add. I also had to stay overnight in Nairobi too as I arrived late at night before then completing my travels with the short flight to Eldoret (nearest airport to Iten, where I am based) and a 40mins bus ride to my final destination. Needless to say I was pretty tired but pleased that the travelling was over, unfortunately though I couldn’t run that day (which I had planned to do) due to my left knee & shin giving me some trouble, both had faired up after the race and I don’t think the long haul flight helped as my left ankle had doubled in size. Fortunately I was able to get some treatment on it that day from David Kirui a therapist who works with world famous Gerard Hartman, who is also based in Kenya during certain times of the year. Thankfully I was back into normal training the next day and the injuries seem to be starting to settle down. I even ran my first harder workout today which was 6 x 2k, I ran this with a small group of german athletes who also staying at the centre. I not quite fully acclimatized yet but I was happy to get a solid session under my belt.

One of my faviourite pics from my last trip to Kenya... 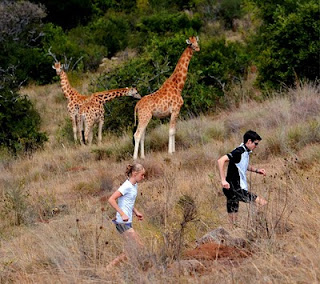 Today saw the arrival of further british athletes, namely Andy Baddeley, Mike skinner, Ben Whitby and Mark Draper, so it will be nice to have company on some of my runs. Although I came out on my own there have been some familiar faces on camp too, namely a few athletes (who are on extended training camps here) and friendly staff whom I met back in Janurary.

Today has been a busy day at the centre as they have played host to some Kenyan delegates for some kind of a conference. Apparently attended by one of the richest men in Kenya… I was told a story today he is not a man to cross, as apparently some of his rivals in the past have randomly disappeared without a trace!

Right that’s it for now as it time for my afternoon nap, which now forms part of my daily routine. One last thing, I had a really fun interview with Tom Williams from Marathon Talk the other day. Any keen runners there who have not heard of Marathon Talk, you should check it out, Tom along with Martin Yelling present the show which is free weekly podcast and well worth a listen. There’s been some really insightful interview with many well know runners and I certainly recommend you give it a listen.
Posted by Lee Merrien at 05:32 No comments: