This is a little bit late as per normal but now I'm In the holding camp in Ulsan ahead of the World champs I have a bit more time to write and post this up...

Firstly baby news! on Thursday 4th September we had a baby girl, Jessica Yves who weighed in at 6lb 15 0z, the middle name(pronounced Eve) uses the male spelling as we wanted to use my late grandpa's middle name in his memory, he passed away last December. Other than lack of sleep mother and baby are doing fine and my wife has been a bit of a star taking the brunt of the baby duties so I could get the rest I needed from training. Our son Thomas celebrated his 3rd birthday the other week too, so with a cluster of kids running around house for his party and people popping in to see Jessica there's been plenty going on. 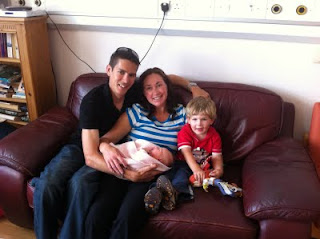 In terms of training I am now into my easing back period here in Ulsan, but prior to that the last few weeks have gone really well, certainly as well as my preparation for the London marathon earlier this year, if not better. I've also managed to get some good acclimatisation prior to the holding camp, with a few sessions in a greenhouse, made available to me thanks to the local vinery the Clematis Nursary. 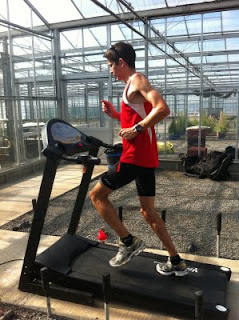 Unfortunately the treadmill I was initially using packed up though, due to getting too hot apparently. It was 36c and 100% humidity on one occasion mind! The greenhouse sessions went well though and i felt pretty comfortable in the that environment, certainly more so than Fae the BBC Guernsey reporter who joined me for part of one my sessions the other week, I think she lasted about 5mins :)

As I say I'm now out in Ulsan in South Korea after a fairly long journey out here, taking the best part of 24hours. Certainly staying awake during the last few hours was a challenge and slept well that first night! the jelag doesn't seem to affecting me too badly either but I understand most people have taken a good 4 or 5 days to get used to the hour time different. I will try to update again here with a bit more info about Ulsan and my final prepations, although that will only be if I can get a new battery charger for my laptop as I left my at home! If I can source another I get another update up here in a few days.