Close but not quite enough

I raced in Liverpool at the weekend in what was the 2nd cross country of UK Challenge series and also the British Trials for European Cross Country Champs (which take place in Dublin in 2 weeks). Unfortunately I look set to miss out on making the team this time around after finishing 9th overall. Whilst 6 guys will be selected for the team and I was essentially the 6th British finisher (excluding Ricky Stevenson who is likely to run in the U23 race and the other 2 athletes were foreign athletes) Mo Farah who didn't run the trial race will be pre-selected. The team is yet to be confirmed but the result probably means I have missed out by one finishing place, the different being 9seconds.

One plus side however was that I contributed to my UK Club Newham & Essex Beagles winning the race off amongst the other British Clubs for the European Club Cross Country Champs which take place in February.

I 'm really disappointed to have missed out on the GB Team though. After last years event when I ran so well and made my first GB team it's all still fresh in my memory as one of my best moments in the sport, so missing out this time around feels a bit harder to take. I don't want to make excuses (although I guess it may still sound like one) but the last couple of weeks I've been struggling to shake off a cold, I took last weekend off training and missed a key session and a couple of runs in an effort to recovery properly. Generally I felt pretty good on the day of the race itself so it perhaps wasn't even a factor but I can't help thinking the last couple of weeks didn't go as well as I would have liked and that extra half a percent in performance may have made all the difference, but not to be.

Onwards and upwards as they say though and in the whole scheme of things one eye has always been on next April (London Marathon). In recent weeks I have been doing slightly more mileage than this time last year with a view to making a smoother transition when the marathon program kicks off properly in the new year. I'm looking at couple of races in the meantime, which I will post up on here once confirmed.

Until next time.
Posted by Lee Merrien at 14:20 No comments:

This weekend I was up in Newcastle for the Gateshead Intl XC which was also the first UK Cross Challenge race of the season. Travel was a bit a drag with two flights involved, my outward journey was also on a rather windy Friday 13th, I think I just made it out of Guernsey in time though as waiting in Southampton I noticed that a flight to Guernsey was cancelled due to strong winds. There was a plus side to the windy conditions though as the journey up to Newcastle only 50mins as opposed to 1hr 10. In was nice being in Newcastle again, another chance to catch up with my mums side of the family.


The race itself went ok all things considered, i finished 5th overall, which was 4th Brit due to 2nd place being an Eritrean athlete. I must admit I would have like a higher finish but on a tricky and very muddy course it was solid enough run to leave me feeling confident going into the european trials in two weeks time in Liverpool. 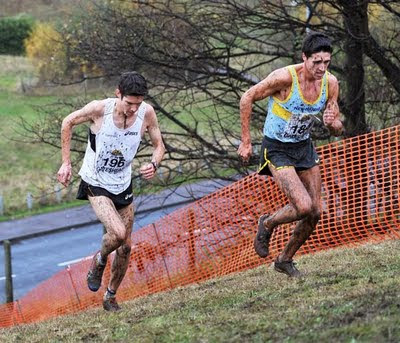 Note checkout the photo, white not the best colour to wear on a muddy course!

After a heavy block of training before this race week I was aware that I might have tired legs going into the race plus I've also had a bit of head cold this week too, which seems worse now after the race. Note sure it effected me much during the race but either way I will be more recovered and in a better state of health in two weeks time I'm sure. Also just heard that there will be a few Guernsey athletes going over too so should have some extra support this time too which is always good.
Posted by Lee Merrien at 17:32 No comments: