One month and counting...

As per usual it's been a while since my last blog post but I have plenty to right about it, it's just been finding the time. Since my selection was announced things have been a bit of a whirl wind, despite a couple of hectic days around the announcement it was probably just as well I was away from most it - I was on holiday with my wife and two children in Lanzarote. Well I say holiday it was just as tiring as my marathon training! We went 'el cheepo' and took a one bedroom self catering apartment in an all inclusive resort. The resort itself was great with good food on offer and yes I did indulge a little! however having an energetic 3 years old who loved the kids disco and late nights and an 8 month year old who decide lye in's weren't for her, things did take's there toll Teresa and myself. It was nice to have time away with the family though and we had fun on beach in the day and most nights took Thomas to the kids disco to showing off his moves... which most of the time involved him running around!... not sure where he gets it from :)  After being away so much of year in Kenya it was nice to just be the four of us for a week but I did come back spent! I actually felt a bit run down, I guess it was to be expected given the usual aftermath effects of the marathon and the a lack of sleep whilst in Lanzarote.
Back at home in Guernsey I was soon back in training routine which was I keen to with Olympics at the forefront of my mind, although the first few weeks of training were somewhat conservative. My coach and I were keen to ensure I that I had fully recovered following the London Marathon & the whole selection situation. Looking back at things now, this was definately the right thing to have done, training is really starting to click into place here in Font Romeu... more on that in a minute.  I must admit since my selection things have been fun in Guernsey for me, a friend of mine from the Education Department and the Guernsey Athletics Club put together a booklet entitled 'From Torteval to London' (Torteval is a small rural parish in Guernsey where I lived and grewed in). The bookley has been aimed at Primary school level essentially encouraging children to work hard to achive their goals and self sport for all its positives, so very flatering that I was the focus. Once the booklet was put together it was destributed out to all primary school children and in particular at an assembly at Forest Primary School, my old school. It was the first time I had been back to the school since I left over 20years ago!  The school has actually been knocked down and rebuilt during that time but one of my old teachers was still there and the response we had from all the kids was incredibly. Someone said to me thats 'that's what the Olympic movement is all about', I couldn't help but think the same thing. The visit was even more special in that Alun (who had put the booklet together) had arranged for Cara Saul to come over... some people may remember that a random facebook page was started to encourage my selection, Cara was the lady behind this. So it was nice to be able to thank her in person for the support she had shown. She is lovely kind hearted women, who whilst admits to not being sporty herself she clear has a passion for watching it and seeing other get involved. 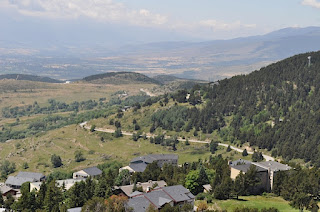 Currently I am in Font Romeu one of two familar UKA altitude training locations, I have been to in the past. I have blogged about Font Romeu before as I've been a few times now so I won't bore you with the same details but what I will say is this is the best weather I have experienced here in all my visits. Sorry to anyone back in the UK reading this as might sound like I am rubbing it in as I'm hearing bad things about the weather in the UK at the moment. For me though it seems the camp has been timed perfectly in order to avoid a UK non-event in during of a summer! hopefully that improves for the Olympics. I am in a good place right now with my training here, feeling I have turned things around well following a bad cold I was struggling to shake off not long before I left Guernsey.  Training these first couple of weeks here have gone as well as I could have hoped for and with another couple to go I feel in a great position to be able to push on and have myself in great shape for Games. As ever it's been tough being away from home again for so long, with the holding camp and my time in the village I will be away from home for 7 weeks in all, my longest time apart from the family since our kids were born. Only the a few days after I left home my daughter walked for the first time, fortunately I have skype and have been able to watch her walking on video... although it's never the same missing out on that contact time with them. My son Thomas doesn't seem too bother though as his grand parents (Teresa parents) are over in Guernsey visiting so he soon forget I wasn't about! 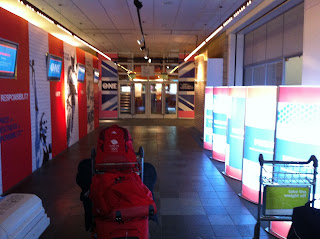 With literally a month to go now, I can't help get a little excited by the prospect of the games, although I must admit when people were asking me a few week backs I been fairly laid back things... I think some people thought it odd that I wasn't excited but I don't think I can stay excited for weeks on end and not expected to feel exhausted in the process. As things start to draw closer though I feel the natural excitement building, prior to departing Font Romeu I went through the Team GB experience at Loughborough more commonly know as kitting out. I won't reveal too much about this as there are still athletes yet to experience this but the BOA seem to have made a real effort to provide a pretty memorable experience.