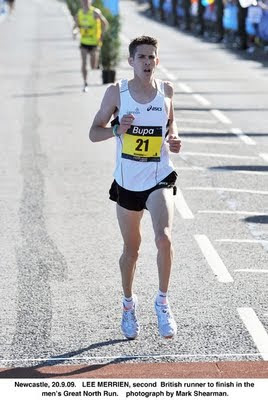 Well that went better than expected I must admit, my finishing time was 64.27 which was quicker than I had hoped so happy days!

I wasn't really sure of my fitness in terms of what I might run being that I have only done 4weeks of training after my end of summer break. Admitedly it was a short break but still if I'm able to run that sort of time now I am confident I can run faster with a good spell of the right training behind me.
The race itself was much more enjoyable that I expected too, other than a couple of the early miles where i was finding my rhythm I felt very good and if anything I felt I finished with more left in the tank. I was in the second group of lead runners for the first 6miles which contained Dan Robinson, Ian Huspith, Neil Renault, Mark Draper (all Brits) and also Alberto Chaica (Portugal), Jon Brown (Canada) and Pete Norwill (Australia). THe first mile was covered in approx 4.45/4.50 but it is partly downhill so I expect it do be a little fast. My race plan was to head out at around 5.00 mile pace but it made more sense to stick with the group rather than get isolated early on, plus after the first 5k (15.10) I was starting to settle into a nice comfortable rhythm and 4.50 to 4.55 pace was f 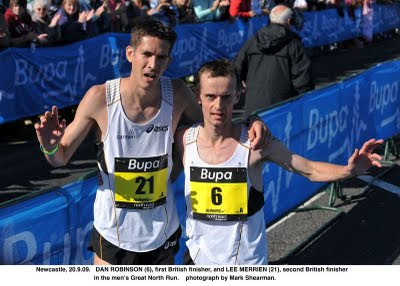 eeling good. After 6miles the Chaica started to push things on and only Dan Robinson went with him, I decided to hold my pace but found this sounds stretched me away from the rest as the group started to break up. From 7 miles onwards I was basically running on my own but really enjoying the crowds and feeling good about the race. If anyway reflection back I could have pushed the last 3-4miles a little more in an effort to catch Dan (who finished 11th in 64.14) but as i was operating ahead of my target pace so I played on the the side of caution. I ran very even race though, with exception of quick first 5k the rest of the race was a solid even pace.
Needless to say though the result and time have give me further confidence that the move to the marathon is the right decision and that even these early stages of winter training that faster time are more than possible at the longer events. I ran a very even paced race in the end though, with exception of the frist 5k being a little quicker the rest of the race was fairly even.
Overall a good experience of things to come and good weekend generally (with the exception of Aurigny deciding not to bring our bags back from Mancheser last night - but that's another story!). It gave us (Teresa, Thomas & myself) the chance to spend some time with the family up in Newcastle which is always nice, my mum comes from a large family of seven with most of family still living in Newcastle. Three of the family's live in a place called Clara Vale, which is small old mining village just outside the centre of Newcastle and next to Tyne. Really beautiful place and some great places to run long the river there, it's actually only a stone through away from Wylam another small village and the birth place of George Stevenson. I've had a few histroy lessons from my uncle during my visits - Stevenson was the inventor of the first public steam train.
Anyway thats' all for now. Next race will probably not be for a few weeks, I plan to run the National 6 stage road relays for Newham (my UK club) which is not til 17th Oct and then the Great South the following weekend in Portsmouth.
Posted by Lee Merrien at 13:56 3 comments:

But first... the half marathon

In my last post I talked about my decision to prepare for a potential spring marathon, well I figured I would get things started by running a half marathon this weekend! My wife Teresa and her good friend Jo Walker (hope you appreciate the name drop Jo) have been training for the Great North Run for the past few months and we decided a while back that we would head up to Newcastle as a family and spend the weekend up North. Initially i was just going up as a supporter and to look after Thomas while Teresa raced, however this scenario didn't last long as I decided I would get in on the act too! If i know I'm in the UK and there's a chance to race, generally I will, unless I'm injuried or have something else on the horizon that I'm preparing for. I think Teresa was a bit annoyed as last time she raced in the UK (last years Great South Run) I got myself a late entry on that one too! Luckily we have plenty of family in Newcastle, as my mum is from Newcastle originally, so I'm hoping one of them will be ok with looking after Thomas on race morning - I haven't asked them yet though!

Fitness wise I'm getting there, and although I'm not expecting to set the world alight this weekend I should be able to run a personal best time for the distance. This is partly down to the fact that I've only ever raced the distance twice. The first time was a long time ago and I'm a much improved athlete since then and the last time was the Guernsey Easter half in 2008. I ran 69mins that day, running very easy for the first few miles and feeling quite controlled in general over the distance, so even though I'm not at full fitness at the moment I think I can better that time. The Great North run is a fast point to point course too so as long as the conditions are ok I should be able to post a decent time, if I'm going to run achievin the qualifying time for the Marathon next spring for the European Champs I will need to be able to run sun 69 mins back to back for the distance anyway.

Oh Teresa has just set up a Just Give page for her charity, which is 'Get Kids Going', if anyone wants to make a donation they can at http://www.justgiving.com/Teresa-Merrien/ I did my bit by giving away much of GB Kit in exchange for cash :)

Look out for post-race report from myself, and Teresa! this time around.

All for now folks.
Posted by Lee Merrien at 14:25 No comments:

Sorry its been so long since my last post, I will endeavour to post more regularly from now on. Since my last post I've had a bit of quiet time in regards to training with a fairly low key couple of weeks. After my short break though I'm starting to put the training back in now and looking forward to some autumn racing. 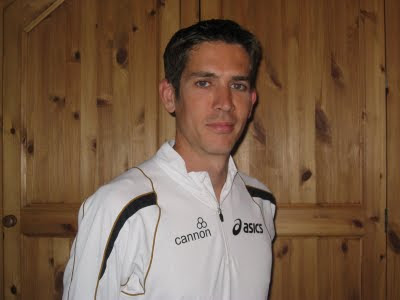 Other news which I didn't get round to posting up includes confirming a kit contract with Asics for the next 12months which will see them provide me gear and footwear, its all helps as I go through trainers like you wouldn't believe! The contact ties in with my main sponsors Cannon.

Anyway as the title of my post implies I'm looking at making the transition to the marathon! It's something I've had in mind for a while, as the event to take me to the London Olympics. After some reflection of this past season and with the Olmpics only three years away, now seems the right time to start making the changes required. Last season was arguably my most successful to date with two GB selections on the country and my first Outdoor National Medal on the track. I was however disappointed with my track season, which was below par after struggling to recover from illness and general fatigue after over-cooking training in April. Anyway after looking at things as a whole I think the future in lies with the longer distances in order to achieve what I want from the sport. The changes in training need to start now though as whilst a 5k runner might still be able to race well at 10k and even a half marathon the training required for the marathon is significantly different. I've recently spoken to Janne Holmen (the 2002 European Marathon Champion) whom I raced in at the Island Games this year as well as John (Nuttal) my coach, who I will continue to work with and I think I have a good idea where I need take things in order to run well at the event, although some of the specific's of training are still to be worked out. It's still early days and nothing has been finalized yet but next year is also the European Championships and I think I'm capable of achieving the qualifying standard (which is 2.18), so next year you might well be seeing my line up at in the London marathon for the first time.

More shorter term this weekend it's the Inter-Insular in Jersey, although I'm doing no track work in training at the moment it's always nice to run and get one over on our Channel Islands rivals. As ever ours mens team looks very strong and without wanting to sound over confident we should walk the mens event. I believe our women are a bit short on numbers so might struggle a little, hopefully that will change over the next few seasons. For any Guernsey people out there I will try to post up results on twitter, the senior fixture is on Saturday from 12.30 til 5pm. I'm travelling over Friday with Teresa and Thomas as planning to have day out and take the little man to the zoo.
Posted by Lee Merrien at 22:11 No comments: