It’s been two weeks since the race but it’s still fresh in the mind and now in a position to post this up after just getting back from our family holiday. Here’s my latest blog update…Results wise I finished 14th overall in a time of 2.14.27, which was a PB by over 2 minutes (previous PB was 2.16.48, which I ran in London last year) although I was actually a little disappointed with the time. I was looking to get under the Olympic & World Champs A Standard of 2.12 and whilst clearly that was still my ideal outcome I made the choice over the race weekend to start with the 2.13 pace group. Partly I felt that the 2.11 group might be a little too quick at this stage and I didn’t want to damage my changes of running in the region of 2.12-2.13 which would have been a good stepping stone to running something faster in the future. I feel on reflection I made the right choice as many of the 2.11 group seemed to struggle and whilst my finish time was not what I was after there were lots of plus points to take away. 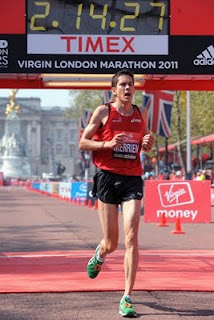 In terms of how the race unfolded, the group I set out with included Stephen Shay (USA) one of the mexican athletes (there were a number Mexicans running, I believe they may have been using this as a trial race) and fellow Brits Dave Webb, Tom Payne and Martin Williams and of course our pacemaker (Max King, a former American steeplechaser, with a marathon best of 2.15). We set off on schedule with myself, Shay and Dave Webb tucking in behind the pacemaker then Martin, the Mexican and Tom Payne in behind us. Generally the pace was spot on throughout although there were a few fluctuations in pace even though the actual mile splits were pretty much bang on (2.13 pace is basically 5.05 per mile). The personal drinks stations (which are every 5k) were a bit busy for our group as unfortunately myself and the three other Brits in the group all happened to choose the same drinks table, which is done the night before the race. This really was a case of sods law because when you deliver your drinks to the organisors the day before everyone can choose the table you would like to be on (there's a choice of tables 1 of 4) and as luck would have it we all choose table 2 and so of the 6 people who had drinks on this table 4 of us all happened to arrive at the table at the same time. Fortunately it didn't seem to effect anything and we filtered through without any major issues. Some time around 8 to 10 miles the group shrunk to just myself, Shay, Webb and our Mexican friend and we reached half way together in 66.37. At this stage I felt really comfortable and was growing in confidence, it was around this stage we started to catch people too, the first person being the Australian Colis Birmingham who was making his marathon debut. Not long after this I saw my wife and friends who were watching at the 14 mile mark, feeling good I gave them a quick thumbs up as I passed (not something I normally do during a race). It wasn't until around 16 to 17 miles that I noticed that I starting to work a little more but looking at my 5k splits this was the quickest split the weather may have also been a bit of factor too as by this time it was starting to quite warm. It was also around this point that the group caught and passed one of the other british athletes, Phil Wicks. The group by this point was just myself, Webb and the mexican however over the next couple of miles this just became myself and Max (our pacemaker).

The only hitch around this time occurred at the 30k mark when I managed to miss the 30k drinks station, annoying because it was here I had attached a carb gel to my sports bottle, luckily I had attached another at the next 5k station as back up but I was ready for the gel at 30k mark. Shortly after the this we hit the 20mile mark, pretty much still bang on 2.13 pace at this point but from here I was on my own. From here unfortunately the pace dropped off a little bit, possibly more than I should have allowed, however I didn’t really check my mile splits at this stages and just focused on keeping myself inj one piece and ticking off people as they came back to me during the last few miles. Also by now the temperature got pretty warm by now. 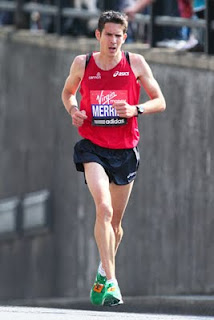 Around 22 I passed Tomas Abya and a little further along the road I passed Chema Martinez (silver medalist at last years Euro champs), passing people in the closing stages whilst you still feeling quite strong gives you a lot of inner strength and when I passed the remaining british runner Andrew Lemoncello I felt for the first time in marathon I was able to enjoy the last half mile! The crowd support over the last 800m was just awesome too and it was a great feeling to be the first British finisher with and to get that kind of crowd reaction provided perhaps a small taste of what could be next August if I can achieve my goals. 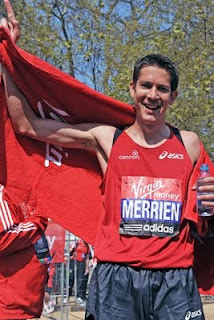 Since the marathon the legs seem to have recovered fairly well. I didn’t run a step for the first 7 days after the race. We went on a family holiday the day after the race and it was nice to be able to take it easy (well as much as you can do with active 2 year old!).. Now I just need to work out how I can fit in an altitude trip before the World Championships as well as ahead a 10 day holding camp and also be around to attend the birth of our second child which is due the first week of August. The Marathon in Daegu in on 4th September. In the meantime I have an MRI scan on my knee in couple of weeks, it’s something which has been around since returning from my first training camp at the start of February. I’ve been able to train on it without too many problems so hopefully nothing to be worried about. As for now I’ve doing some easy runs this week, just once a day of between 20 to 40minutes and other than feeling a bit of a slouch I think I’m ready to get back on the horse and start putting some proper training in again, so next stop Daegu.