Yesterday I raced over 10miles in the Great South Run in Portsmouth, finishing 10th overall in a time of 49.23. The time was not as fast as I had hoped for but conditions were not ideal as it was quite blustery in places and the Portsmouth course is quite exposed at the start and finish area.

I competed in this event last year running 48mins 49secs, so after my half marathon at the Great North Run a few weeks ago (where i went through 10miles in 48.50 feeling good) I was looking for more. On reflection with conditions as they were I can't be too disappointed though plus with training volumes having increased since then so tends to take the edge off your performance.
In terms of how the race race unfolded I went through the first mile in just over 4.30 with the lead pack of 10 runners, however before we got to two miles I became slightly detached and i ran the remainder of the race on my own. So it was more of a 10mile time trial for me i guess! there was a chasing group group behind me that I could have started out with but I think I made the right decision as I feel I would have learnt little from running more conservatively and would probably have still finished in the same position.
All said and done the race will bring my fitness on some more with cross country next up on the schedule... the plan is race in the Gateshead XC in three weeks with the European XC trials two after. As for now we are staying a few more days with the inlaws in Poole before heading heading home, which will involve a few weeks sleeping in the altitude tent.
Until next time.
Posted by Lee Merrien at 14:04 No comments:

Over the weekend I was up in Birmingham for the National Road 6 Stage Road Relays, running for Newham & Essex Beagles (my UK club) we took Team gold with a winning margin of over 90seconds also finishing in a new course record around Sutton Park. 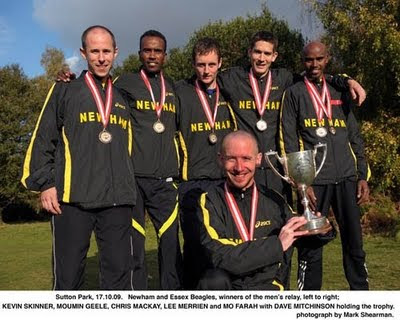 As mention in my previous post it was my first time running the National 6 Stage, I've run the Southern 6 Stage for Guernsey a number of years back but this was my first National. I always used to hear or read about the relays and the general banter amongst the athletes and rival clubs so it nice being part of it this time around.

You can never read too much into individual performances at this time of year but I was fairly satisfied with my run (I ran the 8th fastest leg of the day in 17.10) particularly as I had no one to chase. I was on the third stage expecting when our 2nd leg runner (Chris McKay) came in that I would have a few to chase down, however he came in first so I had a solo run ahead of me. It wasn't all straight forward at the change over either! as just before I was about to start my leg there was a bit of problem with m 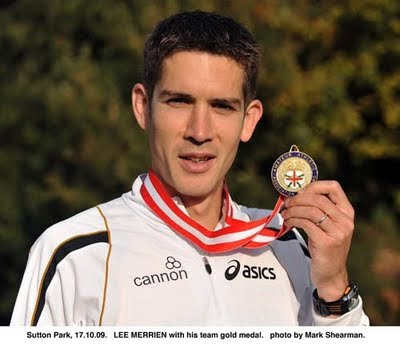 y number!... it turned out that earlier when we arrived (Newham) had been given a few wrong numbers within the team numbers. Without paying too much attention I just pinned on my front and back numbers only to be made aware on the start line literally 60secs before I was due to go that my back and front number didn't match! Fortunately Dave Mitch (our first leg runner) was passing at the time so between the two of us we used part of his number pinning it over the top of mine to make the numbers match, we literally had the last pin in as Chris came in to the change over area and I was off on the course! 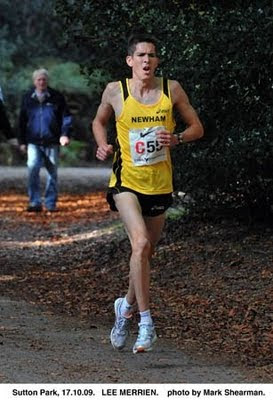 Fortunately it didnt seem to affect my run, although it did get the adrenaline going and I had to make a conscious effort to easy back in the first few minutes so i didn't get too carried away. Generally I felt quite strong during my stage and if anything was a bit too relaxed coming home to hand over to our 4th man. I still managed to increase our narrow lead (from when i took over) to around about 20-30secs by the end. Leeds closed us down on the 4th leg but with Mo Farah and Moumin Geele on our remaining two legs we looked good for victory. Our winning margin was quite big in the end and new course record to boot.
Posted by Lee Merrien at 14:00 No comments:

Sorry it's been so long since my last post, I've been meaning to write something for the last week but things have been pretty hectic. With training in full flow, working being particularly busy this week just gone and Teresa being away for a couple of days mid week it was a bit of juggling act with Thomas to consider too. Things are settling down a little bit now thankfully and despite the busy schedule last week I still managed to get all my training in as planned. The last few weeks since the Great North Run have been pretty solid in terms of training, with the weekly mileage building up to 90 a week so far, key sessions have been strong, without setting the world alight. This sort of thing doesn't phase me these days though as I know from previous experience that a few easy days will leave mind and body feeling fresh and ready for racing when it matters.

Speaking of which I have 2 races coming up, this weekend for a start - I will be doing the National Road Relays in Birmingham for my UK club: Newham. I haven't had the chance to run for them since the National XC in February - which we won, so it would be nice to win again. I understand we have a really strong team in place so if everyone runs well we will certainly be in the mix. The Relays are more of blow out for me though prior to racing the following week in Portsmouth. As I'm only home for a few days before heading to the UK again for the Great South Run, Teresa is running too (for her charity 'Get Kids Going') so we decided to go over for a few days and take Thomas back to see his grand parents in Poole. It will be good to get back racing again for the next 2 weeks, its only been 3 weeks but racing is the best bit so it always feels longer!

Lastly I was following the results of World Half Marathon Champs with interest which were in Birmingham yesterday (an event I considered trying to make the GB team but decided against in the end after a long spring & summer of racing). Anyway its was great to see the american - Dathan Ritzenhein running so well, he claimed individual bronze in a time of 60mins flat, in an event dominated by Africans. I've been following Ritzenhein with interest over the past few months as he has run some fantastic times over 5k and 10k, so the half marathon performance wasn't really a surprise but motivation stuff all the same.

Anyway until next time.
Posted by Lee Merrien at 20:09 No comments: