As ever another late post, but at least I'm consistent. This is my post-Olympic entry...

Where to start, well first of all it seems apt to mention that one of the reasons that I started my blog up was so that people could follow me in my pursuit of one day becoming an Olympic athlete. Having now achieved that I guess I will need to change the title notes of the blog page. Being part of the 'greatest show on earth', as I've heard it referred to, certainly lived up to all expectations and so much more for me, having been to World Champs and previous Commonwealth Games had given me some championship experience but I don't think any British athlete could have anticipated how fantastic the games experience was going to be. Having been outside of the village up in Loughborough where I was based at a holding camp during the earlier days of the games I was getting information and details of how great it all was and that only fuelled my excitement to be part of it all. Watching the likes of Mo, Jess Ennis and Greg Rutherford winning gold and knowing I would soon get the chance to have my Olympic moment sent goosebumps down my spine.

I must admit though there was a time when I felt like the forgotten member of the athletics team being up in Loughborough, as not only had the games started but whilst the athletics programme was also underway I was the sole Team GB athlete remaining in Loughborough. I guess my fellow team mate and marathon runner Scott Overall may have also felt the same given that he was on his own out in Portugal for the remaining days before the Marathon. It was worth the wait but more on the race itself in a moment.

I guess my true Olympic experience started the day I arrived in London, that was Thursday 9th August, 3 days before the Olympic Marathon. As soon I sent foot in the capital you could sense the Olympic vibe across the city and everyone seemed it great spirits and certainly travelling in my Team GB kit also attracted a fair bit of attention. Given that I had arrived in the village only 3 days before my race I was quite conscious of staying well rested and not getting too invovled or excited by the games itself. However with my race finishing in the city and not the stadium I was quite keen to see the stadium in all its glory with athletics in full swing, so on my first night there I went to stadium to check it out and what a night to go! I witnessed probably the best mens 800m race of all time, with David Rudisha winning in World Record, and the last placed athlete coming home in what would normal pick you up a medal if not a gold in previous Olympics! Oh and some guy called Bolt also won a 200m race that night too.

My remaining days before my race were somewhat uneventful considering I was in the Olympic village in the one of the biggest City's of the World with the biggest sporting event going around me but it did at least give me time to focus mentally and soak up my thoughts and feeling about the race and what I wanted from it. One thing that was nice was a very quick family reunion the night before the race, having not seen my family (skype calls aside) for some 7 weeks. I met my wife and 4 year old son (who's birthday I had missed the week before) in Hyde Park. The night before the race myself & Scott Overall were staying in a hotel nearer to the start of the race. Seeing my excited 4 years olds face again after time away never fails to put a big smile back on my face. Unfortunately I would have to wait until after the games to see my daughter again though, she is only 1 year old (I missed her birthday last month too!) and a hectic London probably wouldn't have been the best place for her and would also have been hell for my wife to juggle two kids at the race, Thomas at least will hopefully be old enough to recall some of the day too. 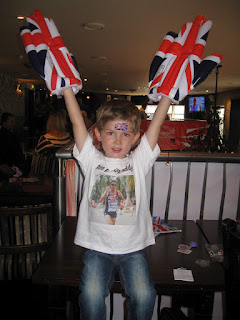 The day and race itself will be one I'll never forget, even if I am to go to another Olympics Games it is never likely to provide the such an incredible atmosphere that I experienced in London. I've never seen so many passionate spectators lining a road race, walls, rooftops and flag poles! The noise was quite literally deafening on certain points of the course too, leaving my ears ringing during the race. In the early stages of the race I was conscious to not get too carried away by it all but it certainly gave me a huge lift over the closing stages when things were hurting with the wheels starting falling off with 5km to go. The conditons on the day as anyone who was there or indeed watched the race, were hot, with temparatures supposedily getting up into the high 20's. If someone had offered me those condition in advance however I would have bitten their hand off. I'm not phased by hot conditions in fact I enjoy them but I guess thats because I've performed well in these type of conditions before and if you can judge the race and conditions well there are a lot of places to be had in final quarter of the race. Whilst I'm proud of my performance on the day I can't help but think there was another 10 places or so to be had if I had judged the race slightly better, after-all I went through half way in 66.30 and finished in 2.17.00.

When I returned to Guernsey someone asked me I'd had an 'Olympic moment'... he was refering to that lasting memory that would stick in mind, and whilst essentially I have many, one of the standout moments has to actually be after the race. London Marathon had arranged a venue for friends and family and after the race I headed over there. The response I received when I entered the pub was pretty overwelming and capped off my Olympics. Even my dad had a tear in his eye and I don't even think I have ever seen my dad shed a tear before. 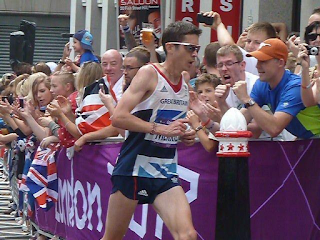 What capped it all off for me was the support and reaction of others, the British public really made the Olympic atmosphere and enhanced some fantastic memories but coming from Guernsey it was incredibly to see so many Guernsey flags lining the route, this made it that bit more special to me  having shared it with them.
Posted by Lee Merrien at 15:24

Lee what can I say, you did really amazingly well! I will never forget it either, and my admiration for you (and your pacing, even though you weren't best chuffed) is very high. It was particularly awesome for me as I got to stand next to your coach and training partner and get a bit of context. I actually have a photo or two of you running towards us which at some point I will try and send you (your coach wanted it too). I have unfortunately left my camera at my folks. They are coming over to watch me compete in the Luberon marathon in 3 weeks though and will bring the camera (and its photos) with them. God bless and very well done.

Hi John, thanks for the kind words. Any pictures would be great, you can forward there through to admin@leemerrienrunning.com. My reply is a little late but hope your Luberon marathon went/goes well.
Rgds

I have found that this site is very informative, interesting and very well written. keep up the nice high quality writing

I want every herpes patient to please read my testimony, my name is SARAH MORGAN am from California in USA, I contacted genital herpes from my ex boyfriend who never had any symptoms. I have had it for 4 months now., and it has affected my life. I have told my boyfriends who I trusted about it and I have never had a bad reaction, it has affected my new relationships with Smith and people think herpes is really a minor skin irritation herpes has a long term effects on health. The stigma attached to this virus by ignorant people is ridiculous. Most people have herpes in one form or another. I would like to advise people on how I get rid of my herpes and I was reading a comment on the internet,and I saw a testimony posted by a woman from Germany that she get rid of her herpes with the help of DR AHKIGBE and so I was so happy when I saw that post, that his herbal medication is free and I quickly collected the herbal doctor email and I email him within 3 hr he respond to my email and I explain things to him he told me not to worry that he is going to cure me totally with his herbal medicine he only request for little money that he will use to buy the items for the preparation of the herbal medicine, wish I send to him because the pain was too much for me to bear and after some days he told me that he has prepare the herbal medicine, that I should send him my address that he want to sent it to me via DHL or FED-EX that was how I got the herbal medication and I use it as I was told and after few days I found out that my herpes was no more, i went to hospital for confirmation and it was true really that was how i got my cured. DR AKHIGBE also cure other deadly diseases like,  HIV/AIDS, HERPES, DIABETES,CANCER, ALS, ASTHMA, WEAK BODY,  HEPATITIS A&B, DENGUE FEVER, RABIES, MAR BURG  DISEASE, THYROID, ARTHRITIS, MENINGITIS ,LUPUS, EPILEPSY, CHRONIC DISEASE, DICK AND BREAST ENLARGEMENT, MALARIA, BACTERIAL DIARRHEA HEART DISEASE., JOINT PAIN, STOMACH PAIN,  DENGUE SCHIZOPHRENIA, POLIO,MULTIPLES SCLEROSIS, HIGH BLOOD PRESSURE, VAGINAL  DISCHARGE,  TUBERCULOSIS, ALZHEIMER , PENIS ENLARGEMENT, PARKINSON'S, to get your rid kindly via his email:   drrealakhigbe@gmail.com    contact his number:  +2349010754824           website:  https://drrealakhigbe.weebly.com       you can still write me on Instagram to get more information. on Sarah Morgan.